KLM is taking care of people and the planet

Home/News, Press Releases/KLM is taking care of people and the planet
Previous Next

KLM is taking care of people and the planet

KLM, the world’s oldest airline still operating under its own name, will turn 100 next year. In 2018 they are celebrating 80 years since the first flight from Amsterdam to Johannesburg. Having been faced with many firsts and challenges throughout the years, in the recent past Corporate Social Responsibility and operating sustainably have become key.

Taking care is a foundation of its business and one which is making a significant difference to both the lives of people and the future of our planet. While the impact of global warming was still being debated, KLM had already begun testing biofuels on commercial flights. As a founding partner of SkyNRG, KLM introduced the first corporate biofuel programme. Employees pay a fee to bridge the difference between the price of traditional fuel and sustainable biofuel. KLM uses that fee to purchase renewable biofuel. 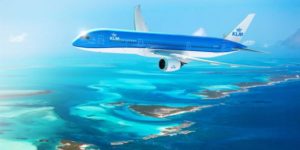 “KLM, and with it the entire Air France-KLM Group takes its responsibility very seriously,” says Wouter Vermeulen, GM of AF-KLM Southern Africa. “This is borne out by the fact that together with Air France we have proudly topped the Dow Jones Sustainability Index in our sector for the past several years,” he adds.

“We are exceptionally aware that our business operations have an impact on the environment and on society too, and we look for the best solutions to mitigate this impact, often joining forces with organisations across the world to help us lead the way forward when it comes to operating as sustainably as possible,” says Vermeulen.

KLM recycles onboard waste where possible; has a sustainable catering policy for its onboard meal service and focuses on using responsibly sourced ingredients. Even old uniforms are recycled using the fibre obtained in them to make carpets for its World Business Class cabins.

In South Africa KLM has been lending support to the Cyril Rhamaphosa Foundation’s Adopt-A-School initiative as well as the Water for Cape Town project. It has also become involved in the Vision 4 Change programme which donates spectacles to underprivileged children. Internationally, KLM also launched Wings of Support which supports 24,866 children globally and is involved in various conservation programmes across Africa.

“What we do at KLM Takes Care is constantly evolving,” explains Vermeulen. “New insights and new technologies emerge every day and enable us to do even more or do what we are already doing even better. And so we grow with the times, making sure that we are always at the cutting edge, and leading by example.”

KLM Royal Dutch Airlines is the oldest scheduled airline in the world still operating under its original name and is part of the Air France-KLM group, a major global air transport player and leading group in terms of intercontinental traffic on departure from Europe.

KLM was the first airline to use biofuels on commercial flights. Together with its venture SkyNRG, KLM introduced the first Corporate BioFuel Program through which companies can use sustainable biofuels for parts of employees’ flights, thereby stimulating the further development of a market for biofuels.